It is getting close!  My brother is already starting to freak out.  This will be the most miles we have ever put on our bikes in one ride and the unknowns are many.  We are prepared, but not really.  We’ve done some reading and purchased what we think we need.

This whole thing started last year.  It was going to be a BMW trip to Alaska so I bought this beaut.

In classic form I started getting it ready for the trip.  I love the bike, but as time went on it became apparent that it might need just a bit more work than I was ready to offer.

Next I found this one.

And even took it on a good long trip with my brother to Notch Peak, UT.  This included some offroad which it did pretty good at, but not great.  I was planning on taking it, but as we went on another weekend ride I started thinking deeply about my brother’s red Africa Twin.

At one point we opened the bikes up and he let me go.  The NC700X is no slouch, but the Africa Twin passed me going so fast it scared me! That might be when I knew I had to have one.

It was the next week that I started negotiations on several Africa Twins.  Eventually I found GO AZ Motorcycles and a sales person who would return my inquiry.  I can’t tell you how many crappy sales people there are out there.

The bike is a 2019 Africa Twin Adventure Sports with lowered seat, lowering links, knobbier and everything else you get stock on this bike, and yes I got the DCT!

I had to fly to Arizona to pick up the bike, which at the time had about 1000 miles, but that was perfect as it would give me a chance to get familiar with the new ride on the way north. 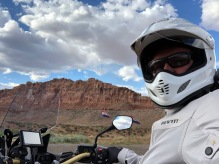 Hot temperatures, great roads (mostly US89, 89A and then 389), south rim of the Grand Canyon and so much more.  I ended up almost doubling the mileage on the bike on my first two days riding it (500miles the first day and 380 the next).  The bike is phenomenal and just what I’ve been itching for.  Now I had a stead I could take to Alaska in comfort and style.

Now I have just about got the bike ready for this 5000 mile trek.

Bags, Cobrra Nemo2 (of course) clothing gear wooly for the seat and a couple Fuel Mules and we should be set.  I know we forget something, but I’m getting pretty excited for the adventure that is just about to happen.

We love motorsports and seeing the beautiful world we live in. bestdamnchainoiler.com View all posts by Epic Trekker