Sweet ride south to the Abbotsford BC / Sumas, WA border crossing, but it was peppered with rain.  No biggie, by this time we knew we could get through the rain and mists with the gear we had.  We were however getting weak about hotels.

Basically if it rained and we were not dried off we were getting a hotel room.  Over all I think we did pretty good, heck we made it the first three days with out a proper shower. 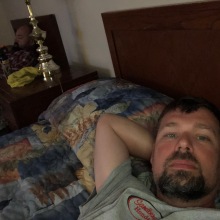 All of our hotels were on the pretty cheap and rough side, except for our last and most luxurious Best Western, where we got a gift bag for signing up as a rewards member ;).

The camping was pretty good all things considered and we never paid for a campsite, not once!  In fact in most locations in BC and the Yukon there were RVers and campers where ever they seemed to land when it got to eventide.  That meant rest stops and little turnoffs were often occupied.  It made me think what one person we met said might have some merit.  He said “They tell us we are the freest in the world in the states, but Canada is freer.”

Yes, the mosquitoes were that bad in all of our campsites in Canada.  It was quite amazing to see the bugs appear almost instantly, it was a good excuse to make camp quick and spend most of our time moving or hiding in our enclosures.  Deet and mosquito nets should be on your list for this sort of trip through Canada and Alaska.

Overall it was fun to do the camping and after the miles we racked up (5000 miles in 8 days) we were tired every night and so we slept well whether in a dumpy hotel or in a tent/hammock.

We love motorsports and seeing the beautiful world we live in. bestdamnchainoiler.com View all posts by Epic Trekker